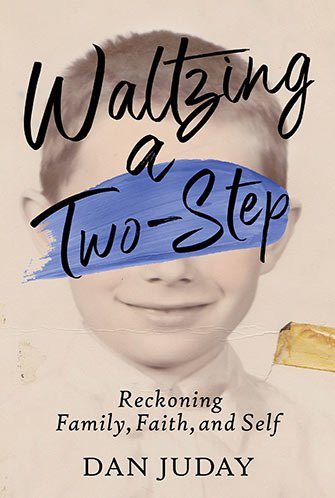 Reckoning Family, Faith, and Self

A bright, timid boy explores a sheltered childhood in rural Indiana. Post-World War II America is undergoing profound change while stasis seems to rule his isolated world. He finds contentment musing on his church, his town library, and the beloved native woodlands that surround him.

When change finally comes, as part of a rising middle-class life and with the turmoil over his developing self, he records his surroundings with an observant eye, finding both the humor and the heartbreak, but with the growing awareness that he doesn’t fit in. As his generation defines itself, he recognizes he is an outsider: at school, at work, and ultimately, among those with whom he is growing up. Silence becomes his defense. Silence about the anxiety of who he might actually be.

Studying abroad offers a chance to follow a girlfriend to Europe, then triggers unforeseen crisis when he falls in love with a young man. He steels himself for an imagined life of tragedy and alienation, which he nonetheless insistently pursues. His quest leads him to dead ends, more journeys, and further struggle. In an overcrowded classroom in the basement of a primary school in Newark, New Jersey, he finds the inner child he had lost along the way. It is his crucial education.

His story unfolds during the tumultuous years of the 1960s and ‘70s with their heady rush of the Kennedy era, roiling disruptions and social unrest that follow assassinations and an escalating war in Vietnam. These are chronicled through the popular culture and music of the times.

This is a cautionary tale, told late in life, bittersweet over things that should have been said earlier. It is a story that resonates today – in an equally unsettled time of social upheaval. It will resonate with anyone who struggles to be who he or she truly is.

Dan Juday is a retired film producer, publisher and armchair poet who lives with his dog Mercy in North Leitrim, Ireland.

He produced several award-winning documentaries with Journey Films for broadcast on PBS, ABC and other networks in the US and abroad. He directed the US publication of The Catechism of the Catholic Church for the US Conference of Catholic Bishops and (then) Bantam-Doubleday-Dell. His poetry has been published in The Famer’s Journal and Force 10, and read for The Yeats Summer School. 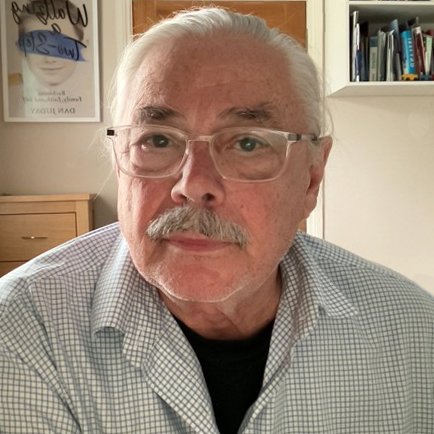 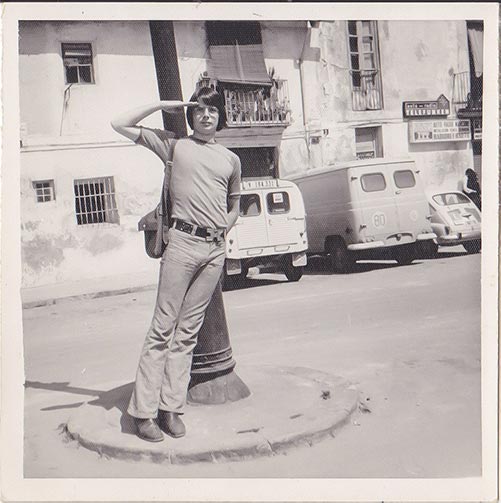 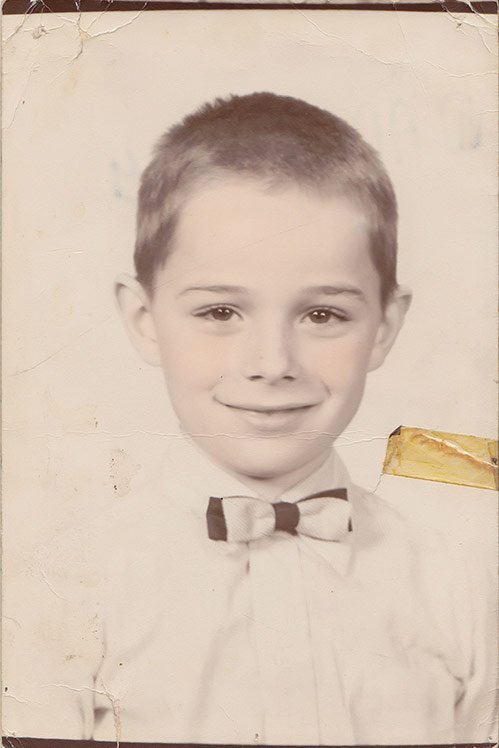 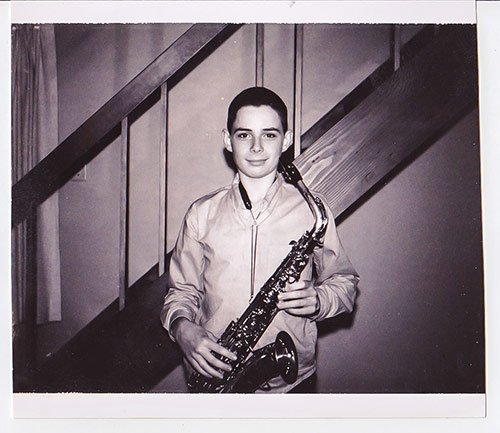 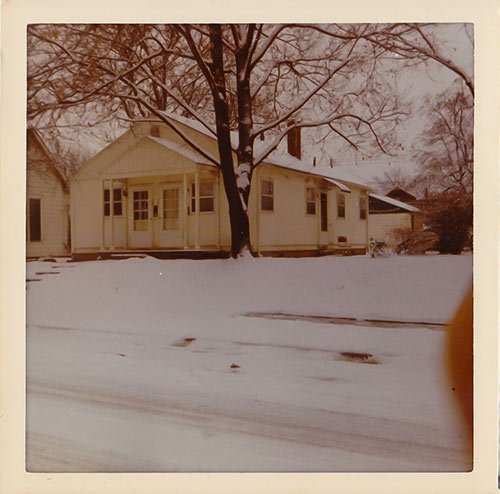 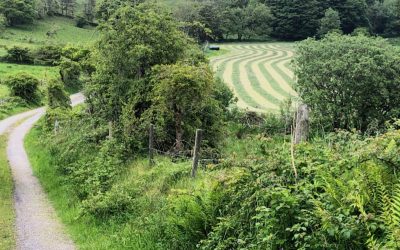 I once owned the old cottage across the lane, and the twenty-five acres of moss-covered grassland...

END_OF_DOCUMENT_TOKEN_TO_BE_REPLACED 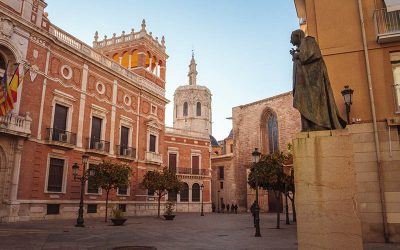 I am staying in an Airbnb rental in Valencia for a week, in a half-acknowledged re-examination of...

END_OF_DOCUMENT_TOKEN_TO_BE_REPLACED 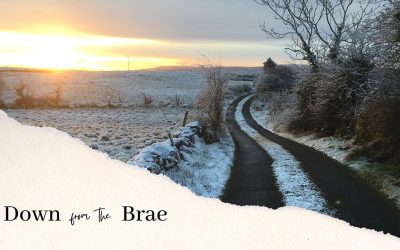 Poem: Down from the Brae

Introducing a selection of poems from memoirist, Dan Juday to celebrate the publication of his...

END_OF_DOCUMENT_TOKEN_TO_BE_REPLACED 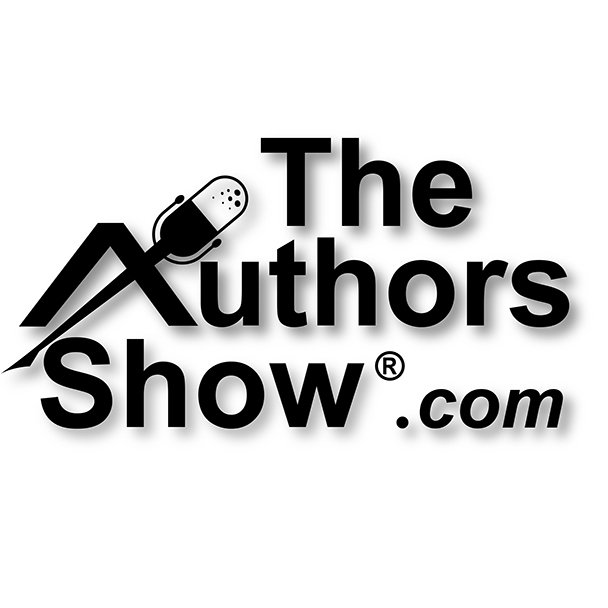 Dan Juday on the Authors Show

Reviews for Waltzing a Two-Step

Review of Waltzing A Two-Step from
FR. JAMES GARDINER

“Most coming-of-age books are so self-referential that, halfway through, the reader is trapped in an unwelcome hagiography. “Waltzing A Two-Step” is different: it’s at times poignant, at other times funny but always engrossing and never, it seems to me, in need of a reality check. I hope that Dan Juday is busy writing a helpful sequel.”

Review of Waltzing A Two-Step from OnlineBookClub.Org

“…I felt like I had found a kindred spirit in the author. The author’s writing style was simple, and his sentences flowed perfectly and allowed me to get the best of the author’s journey. The author explored the primary themes of self-acceptance and self-discovery deftly. I understood the author’s need to fit in; even though he knew he was attracted to men, he tried to maintain heterosexual relationships to please everyone else but himself.“ 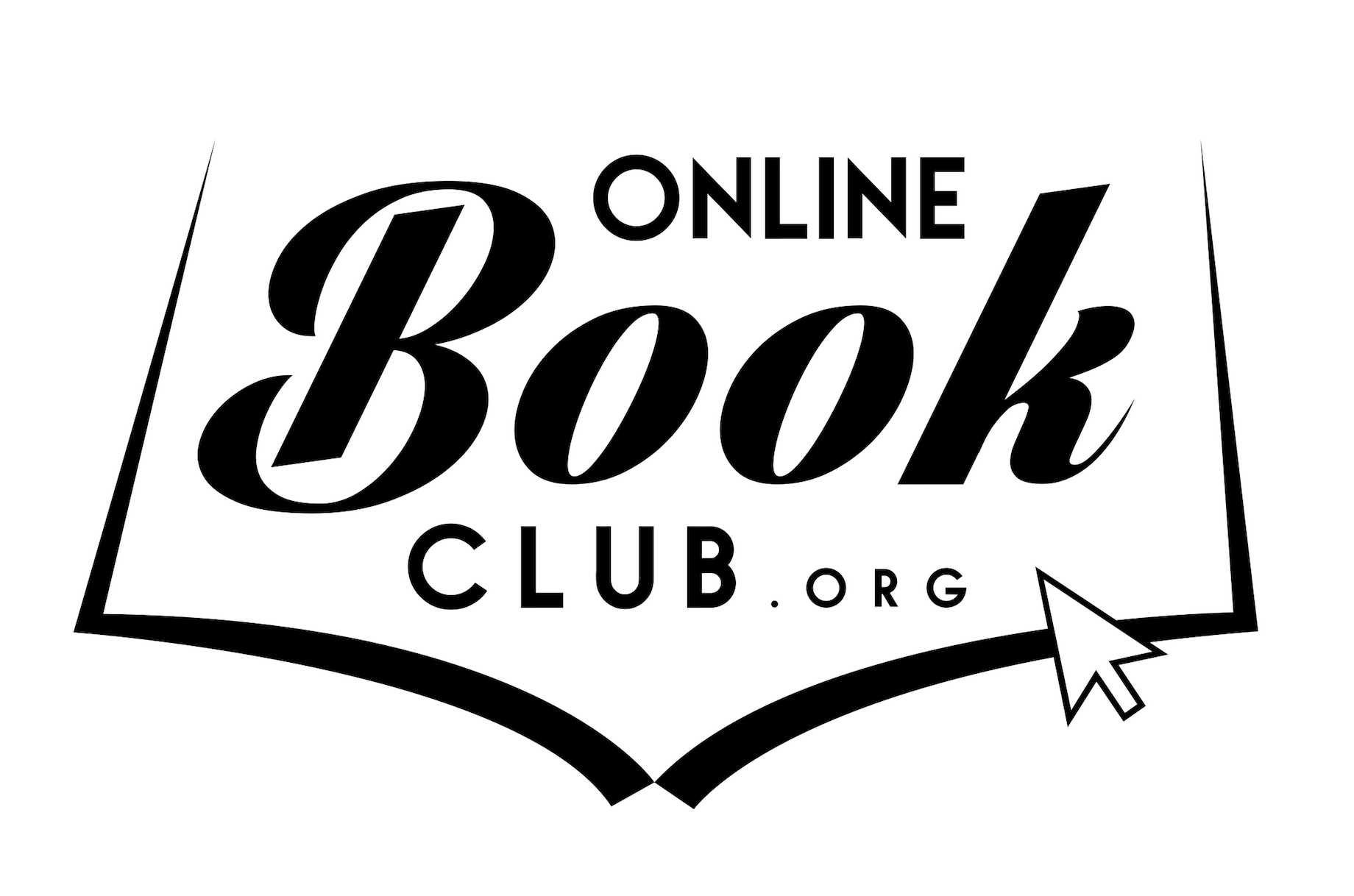 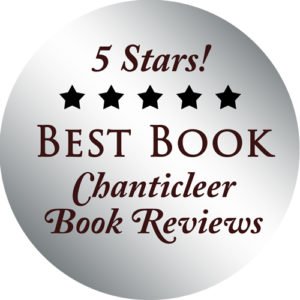 Review of Waltzing A Two-Step from Chanticleer Book Reviews.

“Born a few years after the second world war, Dan experiences a peaceful and happy childhood in rural Indiana, moving frequently before the family settles on a rural area of land named Springwood in Clinton County, Indiana. The Juday family were devout Catholics and enrolled Dan and his siblings in Catholic schools until the family moved to Springwood. Public school became the only option for the siblings. There Dan does his best to fit in but his status as a minority Catholic in a mostly protestant community in the 1950s brings its own challenges.

For Dan, his struggles don’t stop there.”

Readings from Waltzing a Two-Step

Press for Waltzing a Two Step 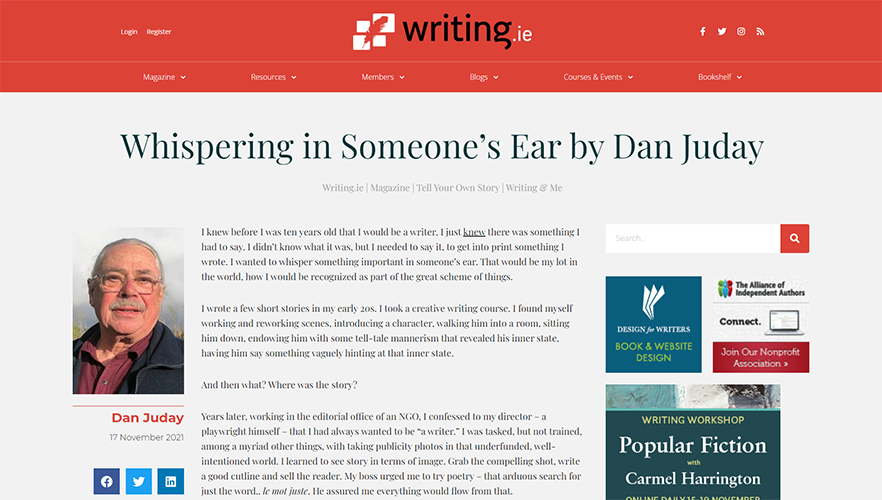 Whispering in Someone’s Ear by Dan Juday for Writing.ie

I knew before I was ten years old that I would be a writer. I just knew there was something I had to say. I didn’t know what it was, but I needed to say it, to get into print something I wrote. I wanted to whisper something important in someone’s ear. That would be my lot in the world, how I would be recognized as part of the great scheme of things…
Read More 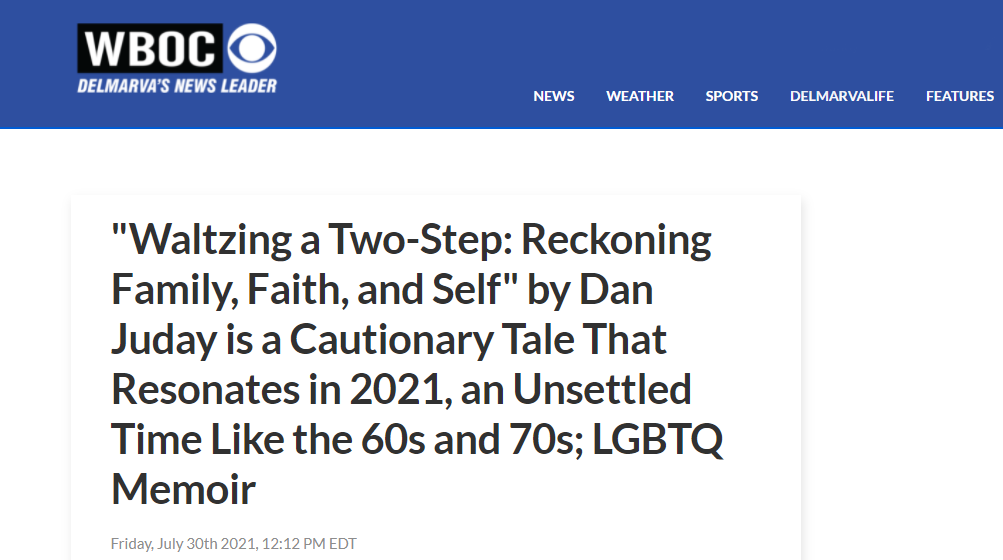 "Waltzing a Two-Step: Reckoning Family, Faith, and Self" by Dan Juday is a Cautionary Tale That Resonates

Author Dan Juday grew up in the conservative, protestant Midwest, feeling like an outsider at school and home in Indiana. His journey of discovery involves his Catholic upbringing, understanding his disdain of machoism and love of peaceful relationships… 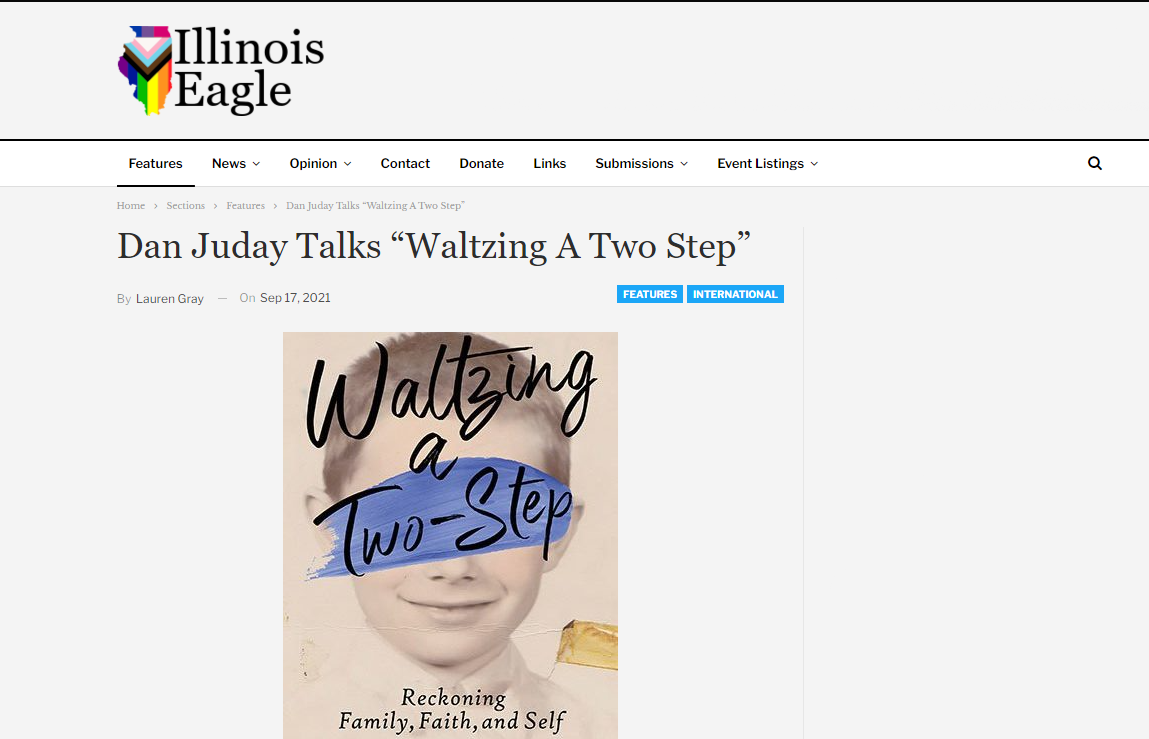 I had the opportunity to read a copy of Waltzing a Two Step: Reckoning, Family, Faith, and Self by Dan Juday. This book chronicles Juday’s earlier years growing up in rural Indiana, and studying abroad in Spain, eventually finding himself and his sexuality. 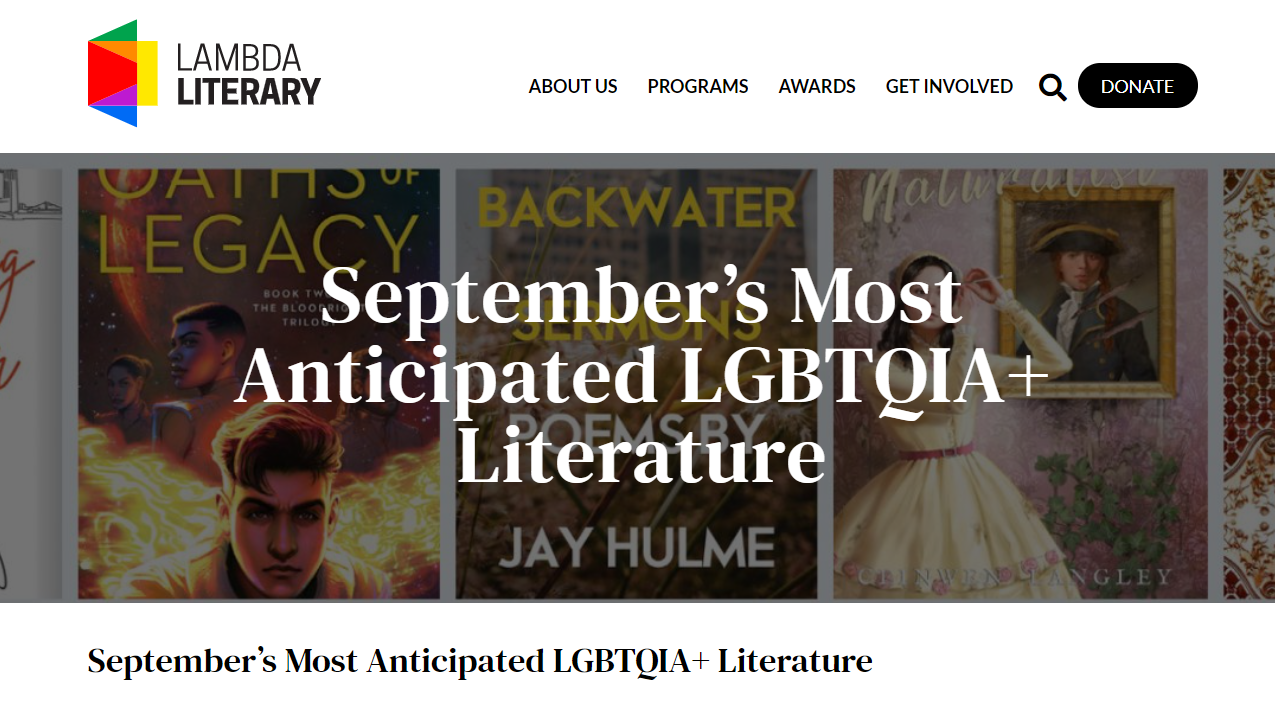 As the leaves begin to turn, the temperatures drop, and pumpkin-flavored goods return to our coffees and meals, we enter into a season of change. Autumn has much in store for us as we leave summer behind and enter this new cycle. 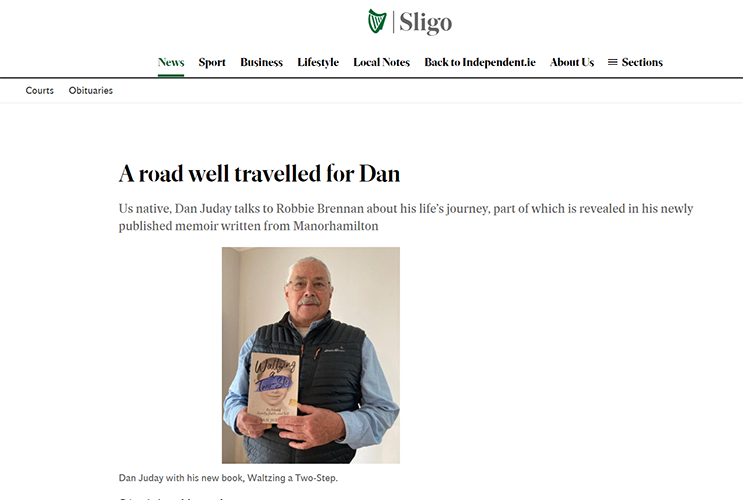 A road well travelled for Dan

US native, Dan Juday talks to Robbie Brennan about his life’s journey, part of which is revealed in his newly published memoir written from Manorhamilton…