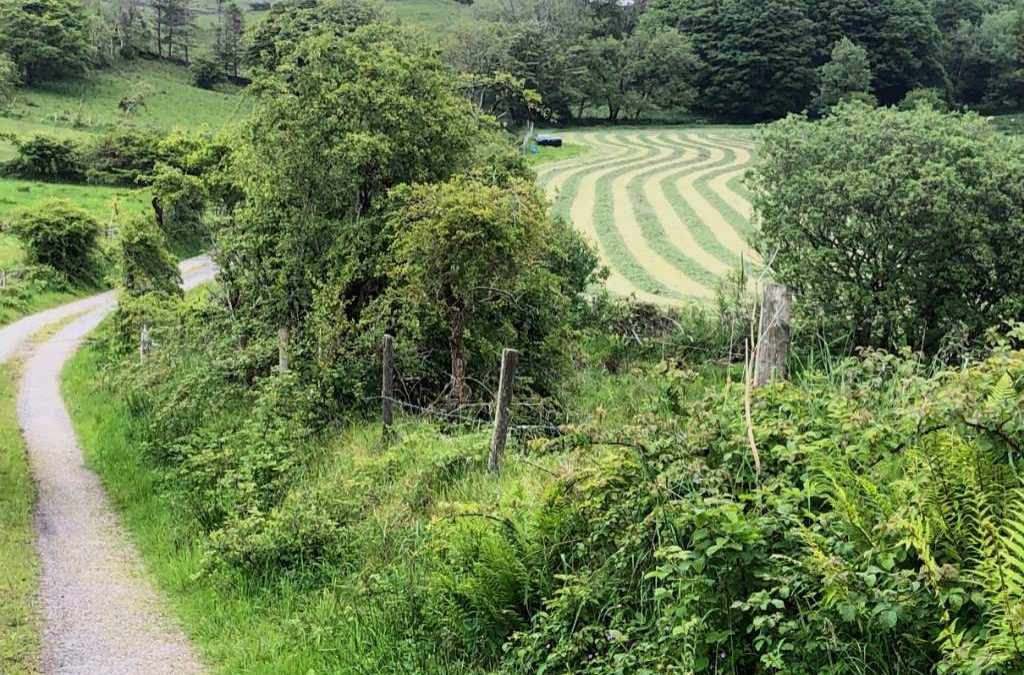 I once owned the old cottage across the lane, and the twenty-five acres of moss-covered grassland that it sits on, up a switch-back lane off the Calry Road in North Leitrim. Sheep-wire fences and stone walls divide it into grazing fields poised above the surrounding valley, above what they call “the manor,” and a bit lower than the hills – Sramore, Leann, Moragh – that form an undulating, melodic crestline almost encasing it.

More accurately, I once co-owned all that with two friends. We were drawn together by a shared love of Ireland, and we egged each other on over the years about buying someplace as a time-share. We eventually took a real-estate tour, itemizing the pros and cons of seaside views and secluded countryside. We compared prices and local amenities. We settled on that dun-colored, squat, two-bed cottage roofed in asbestos. The indoor toilet and extra room had been added in later years. Heat from a solid fuel cooker with back-boiler circulated through a handful of tepid radiators. Local tradition has it that it pre-dates the “night of the big wind”, a well-documented storm that tore across Ireland in 1839. Any further detailed records on a modest place like that, home to modest people, would be scarce. The man who sold the cottage to us – his actual homeplace, his very birthright – returned the following year and sold us the farmland that once belonged with it.

For a brief while, perhaps a couple of years, we shared a vision for the cottage and fields. But this proved to be a fragile thing, untenable for three people coming from three different stories, headed to three different places. Each of us had one foot solidly on our own status quo – our own house, our own career – while we planted the other on the slippery possibilities of a new world. We were bound to lose traction.

The Land Registry Office identifies the townland as Leckaun, or place of the flat rock. When the opportunity to buy the land arose, we told ourselves that it would be a buffer against future encroachment, would preserve the splendid seclusion in which the cottage sat, even if seclusion was not stipulated in the contract. On a per-person basis, we reasoned, the price came to less than a used car. As if this were the offer: a used car, for which we had no need, or those boggy fields of flag and sedge and gorse overlooking Newtownmanor, the Ben Bow Mountain and, off in the distance, the North Atlantic.

I was – and still am – astounded that such rare beauty could be had for so little money. But of course, the beauty itself was not for sale, either. I remember signing a personal check for my part of the transaction. I remember that my hand shook with a nervousness I hadn’t been attuned to until that moment. Sitting in an Irish solicitor’s office and buying a cottage, then farmland so far from home seemed bold. Seemed momentous. As if some irrevocable shift were happening not only to me but to the farm as well.

The 1911 census identifies a dozen dwellings in Leckaun – some as humble as animal sheds – and lists 45 inhabitants by name, occupation and relationship to each other. Of the 12 households, 11 were recorded as Roman Catholic.  These latter were living on the land without actual possession of it. The English and Scottish Plantation settlers came in the early 1600s, declaring null and void traditional land-use patterns that held sway for centuries. Land grants from Kings James I decreed that the fields suddenly belonged to distant landlords. Rents were due for each patch of previously free-held soil, for the cattle and potato-and-small-crop farming that sustained the people. With the establishment of the Irish Free State three hundred years later, the Land Act of 1923 returned the fields back to them and gave them grazing rights up in the wind-shorn commons. They were once more free to sell what once was theirs, what their medieval warlords had battled over, what their neolithic for-bearers held in common. What utter irony that the Land Act meant the farmland could devolve to me.

The soil was never fertile, the weather was never clement, and the potatoes and dairy they supported accommodated only so many hungry mouths. Many born in the ensuing decades were forced to seek livelihoods elsewhere. The year we closed the sale, there were three occupied dwellings in the townland. Tucked away just above the top gate leading up from the Calry Road, a young family – parents and four children – lived in the father’s homeplace. The mother often spoke of her loneliness there, too far from kin, too cut-off from village life. They abandoned the homeplace before the mother died. When the father died, only the oldest son remained to farm the land. The cottage is rotting away, too derelict to raise his family in it. He moved them into the village life his mother pined for.

An Englishman holds the deed to the high-gabled house fronting the lane at its second highest point, farther down the lane from me. I don’t know what drew him to it after its owner died, a well-loved local bachelor with generational roots in Leckaun. For a few years the Englishman lived there in a kind of new-age lifestyle with his eastern European girlfriend. They were always a bit contemptuous of their Irish neighbors, and, according what got back to me, quite scornful of the Yanks. They moved away again, and word has it he and his girlfriend separated. He seems to have lost interest in even keeping up the rare summer visits he used to make.

The third occupied dwelling is a portable cabin, parked in front of a deteriorating two-story farmhouse farther yet down the lane. The farmhouse, once the pride of its Protestant family, is now uninhabitable. The elderly man in the cabin is a scion of that family. He lives alone, aged and leery of visitors. I have never been inside the old place. I am told he has become a hoarder. He seems non-plussed that the glass broke out of the upstairs window panes several years ago. He recently fell and had a hip replacement; the health board would release him from the hospital only if he moved into the fitted cabin rather than the unsafe house.

I now live in my own bungalow across from the cottage I once co-owned – my home now for the last thirty years. The partnership disbanded amid some acrimony. Our mismatched expectations and irreconcilable differences proved too strong for the give and take necessary for it to endure. Things came to an end when one partner forced the sale of the land to recuperate his money. We sold the farm. That transaction felt less momentous. The sale was a simple matter of signing another paper to deed to it someone else. My hand did not shake that second time.

The lane was always privately held, legal access shared by those who own land adjacent to it, now a dwindling number of people. The occasional neighbor from the manor or hiker from town is always welcome to walk it. Its very last house is in Fanary, the next townland over. It belonged to Mrs. Connolly. She was in home health care when I first arrived. She died soon after we bought the farm. Beyond that, the lane turns into a gravel bed running up the mountain, impassable for most vehicles. The few tractors and four-wheel vehicles that scale it drive up to the Old Military Road, now a useless mud track.

In the 17th century the Old Military Road was a strategic route that soldiers defending the Plantation of Ulster used to lay siege to Sligo. Above it, higher into the hills, are scattered the stones of ancient passage graves, ritual burial sites for the original people, those who made first claim to the land, people now lost in the fog of pre-Christian history. Geologists tell us that this part of Leitrim is an outcrop of karst and carboniferous limestone, part of an island that drifted northwards over the eons, from just above the equator, to become in the last 25 million years a part of the westernmost landmass on the European shelf of the North Atlantic. Standing on the ridgeline, the wind, when it rushes out of Greenland or Labrador, is relentless.

I marvel at the labor invested in the stone walls that frame the lane all the way up the Old Military Road. Immense toil was invested in each of them, one rough limestone slab at a time. Many of those stones were pried from the neolithic sites and repurposed into the weathered, medieval tracery running up to the grazing land and across the lea, demarcating property holdings that fluctuated little in the dark centuries before the 45 dwellers of Leckaun were registered in the 1911 census.

I was reared to honor my Irish roots. My great-great-grandmother left Manorhamilton, just over the Ben Bow from here, to marry a man from Ballymena and emigrate to Chicago. My family tree bears the surnames of some of my Leckaun neighbors. But I am a “blow-in”, a permanent outsider by virtue of birth. I speak with an accent that identifies me as such. There is less stigma now to being a blow-in than in more parochial times. But there is no cure for it, no matter the length of my presence. I have come to know my neighbors well. I have worshipped at Sunday Mass with them, and sung in the pub with them on Saturday night. We have all aged together. Most of us quit smoking around the same time. Many of us don’t go out much anymore. I have watched their children grow. As they do, most of them move away from Leckaun. There is little to keep them here. One of my neighbors told me, when I mused on whether any of his five children might stay to run his farm, “Ah sure, Dan. We’re only raising them for export.”

I still walk the lane, am still attentive to the stone walls. I am here in summer, when the sun seems never fully to leave the sky, and in winter, when it glints low on the southern horizon and stares me squarely in the face. I walk under the grey and depthless autumn skies where the jackdaw caws from its black silhouette, and in Atlantic squalls in the too-long spring as I hunch against the chill on my way back to the house. The land is both more familiar and more mysterious than ever. I am now an Irish citizen who can document his ancestral ties to this place.

But a deed in the Land Registry Office gives me no more claim than the paper writs issued by King James I. In the end, Leckaun is merely on loan to her inhabitants. She is not heritable in the long-term, no more than any place on the planet. Neither fondness nor familiarity nor ancestry are insuperable claims to her. Understood on earth’s timescale, she is not even inert, not even permanent. She offers shelter to the short-lived humans who happen upon her. But she cannot be understood, on a planet churning with mortality, war and tectonic plates, to be in anyone’s possession.