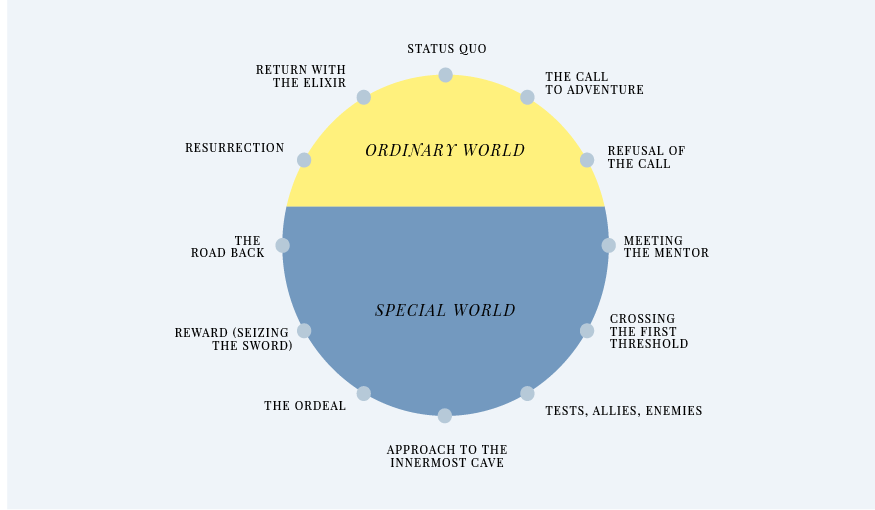 In his book The Hero With A Thousand Faces, Joseph Campbell lays out “The Hero’s Journey” inspired by psychoanalyst Carl Jung’s take on myths from various cultures around the world. Much more complicated than Freytag’s Pyramid, this framework for storytelling takes a mystical look at story structure.

Campbell developed The Hero’s journey after noticing similar themes and beats in different myths from around the world. The concept of Campbell’s Hero’s Journey became so popular that several different people have refined it to create their own versions. The most notable are by David Adams Leeming, Phil Cousineau, and Christopher Vogler.

The Hero’s Journey can be quite complex and hard to understand since Campbell’s original version had seventeen separate steps. We’ve chosen to describe Christopher Vogler’s relatively accessible twelve-step variation instead.

The hero’s journey lends itself to sweeping tales of mythic proportions like Hunger Games, Lord of the Rings, Game of Thrones, or Star Wars. However, the structure can also tell more delicate or nuanced stories, when using the twelve steps to describe internal desires and conflicts rather than external forces.

The Hero’s Journey takes place withing two realms, the “ordinary world” that the protagonist has always known, and the “special world” that the hero discovers on their journey. The special world can be an alternate reality or literal new world, but it generally represents the unknown or undiscovered.

The various steps of the journey take place during three phases, sometimes called acts. In the departure, the protagonists first exists in, and then leaves, the comfort of the ordinary world. During the initiation, they begin to adapt to the special world they have entered, learning and growing as they go. Finally, the wiser, more experienced hero emerges back into the ordinary world during the return.

The Hero’s Journey in The Lion King

Most notably, the hero’s journey was used by George Lucas to write the behemoth Star Wars. Since nearly everyone (including Campbell himself) uses Star Wars to explain the concept, we’ll break down this complex, rich story structure using The Lion King instead.

First we’ll explain the beats of the Hero’s Journey, then in italics we’ll describe the corresponding scene from The Lion King.

The hero happily exists in the world they’ve always known, which sets the scene and is often boring but provides contrast for the protagonist’s future growth.

Mufasa, the king of Pride Rock, shows his son Simba (the hero),  the savannah and teaches him about the delicate balance of the Circle of Life.

2. The Call of Adventure

Something new beckons the hero to expand their horizons where the hero will have an internal or external problem to grapple with throughout the story.

Scar plans to become king by killing Simba and Mufasa in a fabricated stampede. Mufasa saves Simba, but Scar betrays his brother,  sending him to his death by falling from a cliff face.

3. Refusal of the Call

The new horizons are too frightening, so the hero refuses to leave their secure world.

With his father dead, Simba is the heir presumptive of the Pride Lands. Scar convinces him that everyone will blame Simba for his father’s death.

The hero meets someone or something that can help guide them through the unknown. They don’t necessarily receive wisdom, or a training montage, from their mentor at this point, but the mentor will play an important role down the road.

After hearing the news that Mufasa and Simba have died, the wise baboon, Rafiki, sits in his tree and grieves.

Once the hero takes a step away from what they’ve always known, and realize that they can never go back. Often this is the start of a literal journey, but it can also be an emotional one.

Scar convinces his nephew to flee rather than face the blame for his father’s death. Simba is chased by three hyenas who are in league with his uncle Scar. They nearly kill young Simba, but he escapes into a tangle of brambles and runs off into the desert alone.

The hero’s journey starts to get mildly treacherous as the hero encounters new enemies and challenges, but they find friends to lean on along the way.

Simba nearly perishes in the heat of the desert and is saved by strangers, Timon and Pumba, who decide to befriend him. Hakuna Matta ensues.

7. Approach to the Inmost Cave

The hero comes face to face with the issue that sent them on the journey, not equipped to conquer it just yet. However, the experience they gain here will help give the protagonist the insight or inspiration to move forward in the future.

His childhood friend, Nala, arrives in search of food for the starving inhabitants of Pride Rock. She’s shocked to find Simba alive. Our hero is distressed to learn what Scar has done to his home.

The hero hits their biggest stumbling block yet. It might be external enemies or inner demons that threaten to destroy the protagonist. The night is always darkest before the dawn, and things certainly look very bleak right now.

Nala confronts Simba about why he won’t return to Pride Rock and claim his rightful role as king. Haunted by his father’s death, he continues to refuse destiny.

Trials the hero has experienced, all of the lessons they’ve learned, and the allies they have made equip the hero to finally face what they have been dreading or running from. The protagonist finally finds the resolve needed to overcome the final hurdles in his adventure.

After learning that Simba is still alive, Rafiki literally knocks some sense into him. Simba communes with the spirit of his father and decides to face his fears by heading home to take his rightful place as king.

Though the protagonist now knows what they need to do, they struggle to complete their mission. The hero fights the greatest literal or metaphorical enemies that they’ve faced so far, and come close to death or failure. In some extreme cases, the hero does fail or die, but not in The Lion King.

As Simba returns to Pride Rock, he sees the landscape is devastated by Scar’s careless greed and overrun with hyenas loyal to his uncle. Simba must find a way to retake Pride Rock and defeat Scar. His friends Nala, Timon, and Pumba arrive to help him fight the many hyenas defending Simba’s uncle and Pride Rock.

Our hero faces the final test. This pivotal event or showdown will complete the journey that started at the beginning of the story. All of the protagonist’s internal growth enables them to face the challenge they have been grappling with throughout the story.

Simba fights his uncle, but Scar nearly kills his nephew in the same way he killed Mufasa. Simba’s rage gives him the strength to pull himself from the ledge and finally accuse Scar of murdering his father. Now exposed as a liar, Scar’s allies turn against and destroy him, thus returning order to Pride Rock.

12. Return with the Elixir

The protagonist returns to the world or situation they left at the beginning of the story. While the surroundings may have stayed the same, the hero is enormously changed. What was once familiar might now seem foreign, but that is our hero’s new normal.Simba marches to the top of Pride Rock and roars his kingship, answered by a chorus of roars from his family and friends. Order has returned to the savannah, and (the circle of) life is once again stable and safe.

The Hero’s Journey is the quintessential story structure, especially for sweeping, epic tales of good versus evil. Compared to a simple structure like Freytag’s Pyramid, it might seem a bit overwhelming or too structured. However, it’s a tried and true formula for creating a rich and complex plot.

In the next post of this series, we’ll explore the Story Circle, made popular by Community and Rick & Morty creator Dan Harmon. It’s an elegant, and streamlined version of the Hero’s Journey that consists of only eight steps.

Let us know in the comments what other book related topics you’d like us to blog about.