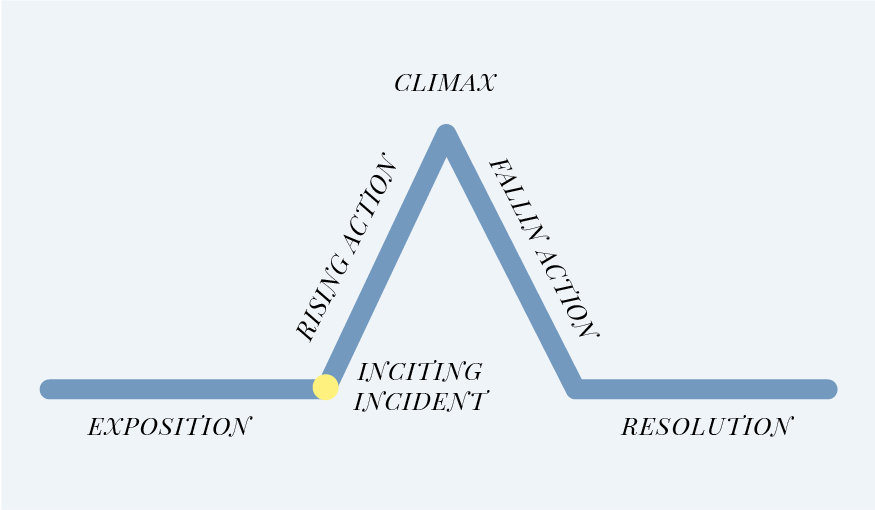 Just from hearing stories, watching movies, or reading books, you probably have an inherent understanding of the basics of plot structure. But truly understanding the building blocks of storytelling and the most effective blueprints for building complex structures can take your story from a cheesy romance novel to a New York Times Bestseller.

In this three-part blog series, we’re going to delve into the world of plot structure. We’ll start with the simplest one, Freytag’s Pyramid.

Harken back to grade-school English class when plot structure was introduced and Freytag’s Pyramid is probably buried among cobwebs in the back of your mind. Created to describe Greek tragedies and Shakespeare’s plays, this basic structure has five parts: exposition, rising action, climax, falling action, and a resolution.

The story follows a protagonist, aka the hero (occasionally the anti-hero), that we hopefully empathize with in some way. To keep the plot interesting, the antagonist, or villain, waits in the wings to spoil the hero’s plans, creating dramatic tension. Though they take many forms, antagonists are almost always nouns (think person, place, or thing). Yes, that encompasses anything from a serial killer to the concept of capitalism or the subways of New York.

Use your imagination! Some of the most engaging antagonists are metaphors for essential aspects of the human condition.

The story structure starts with exposition. If plot was a television series, then exposition would be the pilot episode introducing characters, environment, tone, and motivation. When done poorly, this stage is uninteresting but it is always essential to understand what’s to come.

Exposition sets the stage so we can understand where the protagonist comes from, what motivates them, and what hinders them. Before you attempt to write this section, take the time to develop your characters and the setting, know more about those two elements than you tell readers.

That is what makes a blockbuster movie or best-selling book. Your job as a writer is to build an emotional connection with your audience by sharing details that bring your setting and characters to life in their minds.

This portion of the story remains relatively uneventful until an inciting incident, often caused by the antagonist, shakes up the plot and catapults the story on to the next stage of the plot.

Our protagonist meets the antagonist during the inciting incident, and things get juicy! The hero wants something, but the villain stands in their way of getting it. How will the hero overcome their troubles? This rising action wipes out any potential exposition doldrums and engages the reader.

Dramatic tension between the protagonist and antagonist comes to a head. In a drama, that often means things go irreparably or tragically wrong. In a comedy, the hero usually finds inner strength and a solution to their problem.

As the character, Dr. Jules Hilbert, put it in the movie Stranger Than Fiction, “Tragedy, you die. Comedy, you get hitched.”

After finding a solution during the climax, in this part of the story, we watch the result of the hero’s decision unfold. The Capulets and Montagues bury Romeo & Juliet. Having saved Christmas, the characters in many a Hallmark movie realize they’ve loved each other all along.

Resolution: Wrap It Up

Whether good or ill, the cause of dramatic tension resolves, and the story comes to an end. Sometimes with a neatly tied bow or a “happily ever after.” Other times with a lingering question that we must ask ourselves about things like the nature of humanity or the meaning of life.

Because of its simplicity, Freytag’s Pyramid can produce a satisfying, enjoyable story that stands the test of time. However, many writers need a more expansive and structured approach to develop engaging and well-rounded stories. So, in our next blog post, we’ll explore a much more complex plot structure called The Hero’s Journey.

Let us know in the comments if you’d be interested in a blog series on character development.