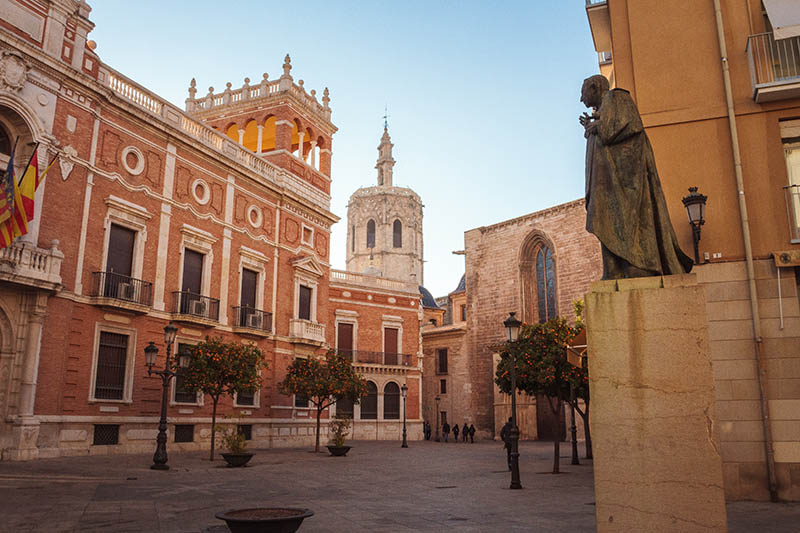 I am staying in an Airbnb rental in Valencia for a week, in a half-acknowledged re-examination of a long-ago formative period. I have reached the age when the view behind me is more enticing than the one ahead. I chose the flat for its central location in Ruzafa, the neighborhood where I lived then, during my junior year abroad in 1968-69, the pivotal year in which I was forced to reimagine my future. I had a room-and-board arrangement then in a fifth-floor apartment of a woman I came to call Mama. She had another boarder, Don Manuel, a middle-aged bachelor, a petrochemical engineer with the national railroad company. Her two children were grown and moved out, and she was widowed. She and Don Manuel were settled into a domestic routine of whatever unacknowledged closeness in those cramped quarters. She exuded Mediterranean sunshine and the Valencian love of music and gaiety. Don Manuel – swarthy, taciturn – was from Galicia in northwestern Spain, a wet and mountainous place where people pride themselves on forbearance against life’s adversities.

My Airbnb flat is roomy and well-lit, but it is four floors up from the street, through a cramped, miserable lobby. There is no elevator, only the narrow climb up a dark stairwell that turns right every quarter-landing, eleven times, over a total of 56 steps. Likewise, 56 steps down to go for coffee and a roll in the morning. I keep a backpack with me, and when I come back to the building, I run through a mental check list to ensure I’ve bought anything I need before climbing back up. I need to limit the number of sorties each day.

I am on the corner of calle Cuba and calle Puerto Rico, a few blocks from Mama’s old flat. I look down from my balcony onto umbrellas set out for midday and evening meals served al fresco. Ruzafa’s grid is still intact, but public life has changed in the ensuring years. Hipsters discovered the neighborhood’s potential during the prosperity bubble the EU brought to Spain, as well as its underpriced real-estate. The streets of my student days had none of the palette I see below me now. French windows trimmed in white punctuate facades painted yellow and ochre, mint green and powder blue.  There are bicycle lanes and one-way traffic. No-parking laws enable wide sidewalks for the cafes and pizzas shops and alternative bars, whose clientele spill out every night to bask in their own self-regard, to revel in their own trendy company.

Back then much of Valencia was dun-colored, gray and unwashed. It shines in the Mediterranean sunlight now. The garish neon advertisement signs that hid the finely wrought details of the city center buildings have been dismantled and removed. The new street lamps reference the beaux-arts age when Valencia was last in her glory. The streets themselves are tarted up, polished, newly-shod in marble pavement slabs. The architectural coherence remains intact in spite of the varied facades. I return to an at-once familiar and never-before-seen gem of a city. I know well her sea air, her palm canopy, her solid sky, her people’s determined gait. I have by heart the familiar rituals of her small shops and nearly every one of her storied landmarks. How true to herself she remains.

Below my balcony the sidewalk patrons chat and laugh and clang their glasses against their tables until the late hours, engaged in settled lives in the calm and pleasant evening air. They rely on such pleasantness; it is part of their world. What do they talk about? They are raucous, seeing and being seen, not seeing me. I don’t fit in. I chastise myself, at moments, for not being down there, among them, more fully engaged now that I have returned after so much time. But the reality is that I know none of them. With whom should I be chatting and laughing?

Wait staff orchestrate each evening. No one is seated before 7 PM. They aren’t serving until 6:59 has passed, even as they stand around talking among themselves. One mustn’t presume a table. By 7:30, all the tables are filled. From Friday through Sunday I can’t find a place willing to seat a single, older man. Everyone is holding tables for younger, larger, more remunerative parties. I luck across a Japanese place just beyond Mercado Ruzafa, where the sushi chefs train the young Spanish help, and where no one else is eating. I take a chance. It is a lovely meal, quite innovative and delicious. The food is ordered on an iPad and brought by a robot that stops far enough away that I have to push the table back and stumble to my feet to cross over to get it. By the time I realize this and clear the edge of the table, the robot says “Gracias” and “Adios” and wheels away with my food. I give the sushi bar lady a wounded look. She scrambles, recovers my food and brings it back to my table.

On my daily outings I discover a few new museums and several old churches. I ply once-familiar routes, with my foot arches cramping and calf muscles aching. My physical energy is waning. I resolve to conserve it, to spend it wisely, to accept the approaching loss. I walk beneath my former student bedroom window more than once. I check the doorbell outside the building entrance. Sure enough, it still says “T. Esteve” (dona Maria Teresa Esteve y Cambra was Mama’s name). She’s surely been dead for many years. Did her son keep the apartment? Is it rent controlled if he never reports her passing? I stop for a beer at a chic place next door, admiring the old woodwork on its facade. Suddenly, I realize this used to be the bodega where Mama sent me with her empty wine bottles to be refilled (17 pesetas). On the other side of the building, where they once displayed horsemeat, the place has been converted to a yogurt shop selling all kinds of exotic flavors to young couples seated at nearby benches.

I feel anxious my last few nights here. As if I am fearful of not getting back home to Ireland. As if I have made a mistake returning to Valencia where what confronts me constantly is the passing of time, my otherness in the Valencia of today, or maybe a re-encountering of the otherness I felt living in Valencia then, maybe regret that I had forgot how othered I felt and had returned, through much time and effort and expense, only to be confronted with it again.

On the other hand, I more than once turn a corner and come upon a cherished building or small plaza associated with a fond memory, and I revel in their perduring beauty, their patent solidity, their ability to conjure a hallowed time and place. I ruminate contentedly in such moments.

Valencia, La Clara. La Sirena. When I leave her again this loneliness that plagues me will be forgotten. Valencia – ancient seat of the Mediterranean silk trade – will be in my head like a worm. Tableaux after tableaux of her palm-lined, contoured avenues with their fingers of narrow side-streets will screen through memory’s retina and project their images against the back of my eyelids when they close, reminding me of what still waits here, what remains when I leave, as I so often have, sometimes with an eye to return and sometimes knowing that I never can.

My last day, a Sunday, on a walk past the old market, I see the propped-open side door of the church where I often went for Sunday Mass. The Parroquia de San Valero y San Vicente Martir. I go in to see what I might remember. People are just leaving from Mass. The opulence astonishes me. Sunlight piercing the multi-windowed dome over the transept glints and gleams on hundreds of carvings, paintings and sculptures in gilt and polychromed wood, delicate alabaster and bas relief, many set high overhead in vaulted, neo-classic arches like St. Peter’s Basilica. Piety takes many forms – medieval, counterreformation and 19th century – and is imaged everywhere, reverenced in statuary and portraiture – bishops, martyrs and virgins. Just over the main altar hangs a polychrome icon of the Madonna, crown on her head, the infant God-Man in her maternal embrace like a jewel, as if they were the core of the theological argument. Farther up the wall looms two larger-than-life gilt statues: one a replica of St. Vincent the Martyr, the city’s patron saint, and one of Bishop Valerius of Zaragoza, to whom St. Vincent was deacon. The wise Bishop Valerius suffered a speech impediment; St. Vincent was eloquent. He served as the bishop’s mouthpiece, and the two of them proselytized together through the dark ages.

I hear a few tentative notes on the organ, and so I sit in a pew near the front altar, ready to listen to some music, when it occurs to me that people are straggling in for another Mass. They are older, like me. Of the same era, we were once young together. Surely some of us must have shared these very pews on a Sunday or two all those years ago. We have replaced the old people of those days, but no young ones are here to replace us. I could be sitting in someone’s favorite pew, but no one shows any discomfort with my presence. They mutter their responses in Spanish; I do the same when I can, or in English when I can’t. At the kiss of peace, the moment we once warmly greeted each other, each of us turns to simply acknowledge the other with a nod, hands stiffly at our side. The pandemic prevents us from reaching out to embrace across the half-century we have been apart.

What must I have made of this church back then? I certainly hadn’t given any thought to St. Vincent Martyr in all these years, much less Bishop Valerius. The red and gilt icon of Mother Mary surely would have caught my eye. What I most remember feeling when I was here – and time is such a distorting lens – was the seriousness with which this sanctuary was constructed and embellished and maintained, the seriousness of the Mass celebrated within it several times a day, the fervent trust that the special favors and forgiveness petitioned in its eternal rites would seep out the doors and roll out onto the streets, would bestow their intended benefit on the people going to the market and the people living in the neighborhood. As if ardor and repetition could ameliorate the world’s mutability and caprice.